The last couple months have been pretty nuts around the Lone Shark offices. We have three games all going through the production process at the same time. Every day, we wake up to new requests from three different printers, proofs showing up, calls from our fulfillers, and so much more. If we ever thought, “Hey, making games will be easy!” we certainly don’t think it now. But it’s been fun, and the results are just astounding.

Before we get into details, we want to tell you about our plans for Emerald City Comic Con, which starts tomorrow in Seattle. If you’re at the show, please come to booth 204 (which we share with our friends at Alaska Robotics) and hang out with us! We’ll have The Maze of Games and the Apocrypha base set for sale, plus previews of all the games below. The booth may be empty now, but tomorrow it will be hopping. 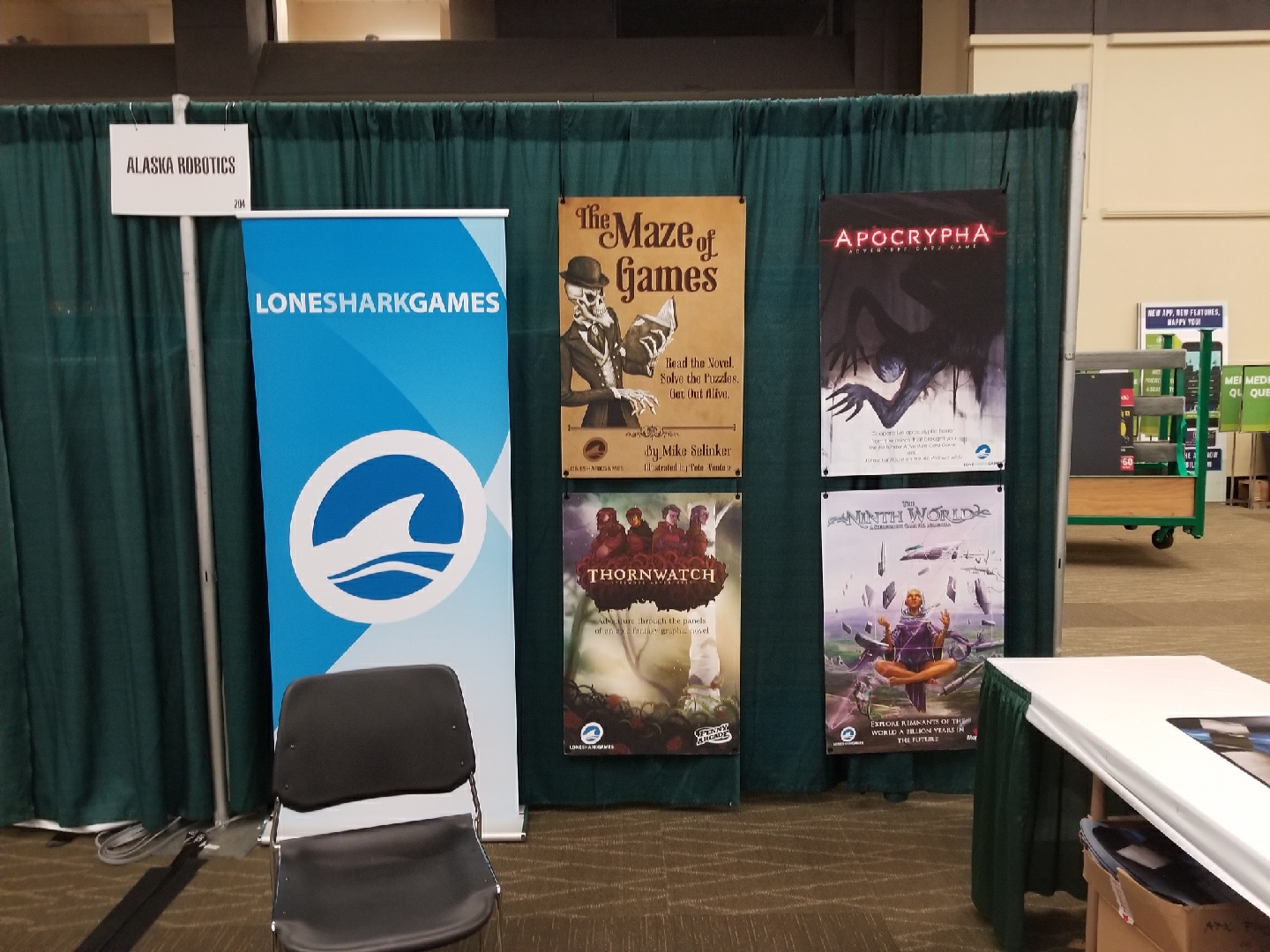 The Ninth World is printed and assembled

The Ninth World is done in assembly. We’ve now seen all the components of the game in their finished form. The assembly of the games all got done in the last few weeks, right before Chinese New Year, but we had a problem with two of the box components, so we had those remade. We hope to see finals on those in a couple days, then it should be all wrapped up in a couple weeks and put on a boat to us.

We asked our printer for some videos of the printed box. Here’s what the inner box with its foldout board and world map look like. We’re really happy with this.

Apocrypha’s The Flesh and The Devil are at the printer

We sent the Apocrypha Adventure Card Game‘s second box The Flesh to the printer a couple months back, and the third box The Devil will be joining it next week. We’re simultaneously wrapping up our final playtests of our last two chapters The Book of the Animus and The Book of the Serpents, finishing the graphic design on all the cards, and locking in the storybook. It’s looking pretty great.

Playtesting on this last box has been wild and bizarre, as it contains powers like time travel, dreamshare, prehistoric revival, and building a ziggurat. There are cards that do things we’ve never tried in any game. One of them brings on the apocalypse.

We hope to bundle all of this up to our printer in the next couple weeks, then it will join box two, The Flesh, in the production process. Because we’ve now done this twice with the same printer, we expect the file approval process to go fairly quickly, and for the games to start printing soon after. We don’t have print and ship dates yet, but we will let you know as soon as we know.

It’s quite exciting for us to see the end of the trilogy, which was by far the largest project we’ve ever taken on. I’ve written a lot of story for this game, almost as much as The Maze of Games. We got some great authors working on the project, including late stage cameos from Borderlands writer Mikey Neumann, Secret Hitler‘s Tommy Maranges, and our Thornwatch co-designer Rodney Thompson. The art has been great to work with. A whole lot of fascinating characters have come to life.

The playtest board now says “Complete” by nearly everything. Our graphics guy Skylar said yesterday, “I just realized these are the last true threats I’m ever going to lay out.” I approved Liz’s final box design and gave the last instructions to Alex on the rulebook. The Master’s Edition boxes are underway. I might actually be out of obscure references. It’s really been a great ride. And we think you’ll like the next couple expansions when we get them to you.

Side note: Here’s an amazing piece on Apocrypha from GeekDad’s Jonathan H. Liu. Jonathan has seen literally every version of this game, from back when we first took a prototype called “Saints” to GameStorm in Portland. He’s chronicled Saints’ development into the Pathfinder Adventure Card Game, and then its evolution into Apocrypha. His review and overview is a great read, so take a look when you have a chance.

Here are the Thornwatch Core Set and The Dark of the Wood in their proof stage. Our printer has diligently worked with us to get all the files the way we need them. We’ve gone through dozens of versions in the last few weeks, trying to get everything perfect. We’re delighted with the quality of everything we’ve seen. Take a look.

Our friend Jason at Dapper Devil is making us some beautiful Judging Wood boxes and acrylic pawns. These are individually crafted by Dapper Devil. You can see them in production here.

Also, we got one of these Pinny Arcade pins in recently. It looks pretty swank.

We’re on a schedule that gets the games finished sometime in April. Then we will have a massive process of shipping the games to us and getting them fulfilled. There are a million details to that which we’re working out now, including signing a whole lot of copies. Because we’re printing in the United States, we expect most of them to get to our backers in the US and Canada in May and June. The ones outside of North America may take a little longer. Those are just estimates. Once we have a firmer handle on shipping, we’ll lay out a more complete schedule.

So that’s a whole lot of production stuff going on. We’re also just starting design on our next Pathfinder Adventure Card Game set, which will have a very different format than previous sets. But that’s a complicated post for another day. For now, we’re gonna pack up for Emerald City Comic Con and get ready to bring all these games to you. Thanks for reading, and thanks for supporting our games!